Austin Coppock was contemplating writing a piece years ago about which stimulants belonged to which zodiac signs. He ascribed green tea to Libra, and it was so perfect.

Caffeine is the go-to drug of choice for getting the engines revving, bringing the brain online, and activating the word machine — in the morning or in general, for millions of people.

Caffeine pairs well with Libra being Cardinal, the mode of signs with an initiatory and activating go-getting quality, and an air sign, the element of intellectually oriented, communicative signs.

Tea has less caffeine than coffee and produces a softer buzz. Green tea is even more moderate than standard black tea, and has beautifying and healing properties, being full of antioxidants. It is associated with the maintenance of youth and is often used as an extract in beauty products.

Green tea is also a more refined, attractive, and high brow selection than standard black, remaining true to Venus’ good taste and aesthetic sensibilities. It is by far the prettiest common tea (though admittedly murky brown liquids aren’t hard to beat for style).

Some of the more elaborate Japanese tea rituals involve the preparation of matcha, a powdered green tea that is hand whipped to a froth and intended to be savored and appreciated slowly.

Green is one of the colors associated with Venus, as the patina on her metal, copper, turns green over time. It also represents Venus’ relationship to earthly pleasures and lushness, being the color of chlorophyll, the agent primarily responsible for the green hues of the vegetal sphere.

Emerald is frequently correlated with Venus in the Western tradition, and is known as the primary birth stone for Taurus, the earth sign Venus rules.

Venus is also associated with white, brilliance, and sparkle, making for the Vedic tradition’s association with diamond. Both are highly coveted and beautiful precious stones; the diamond notably being the most dominant Western selection for wedding rings.

[I am aware of the horrors of the diamond trade and the marketing tactics and false scarcity behind the diamond engagement ring trend, but it bears mention that Venus is the planet of love, partnership, and romance, and diamond is an exquisite exemplar of her qualities.]

Which brings us to another beverage — this one related to weddings, anniversaries, and celebrations — champagne! Venus has strong associations with bubbles, because they bring joy, pleasure, and excitement, and are frequently used to mark happy occasions.

They are a literal representation of effervescence, which is a Venusian feature, and are often paired with sugar (ruled by Venus), as in soda, or used in alcoholic beverages, which reduce social inhibitions and can stir the libidinal instincts. For those reasons, Venus is associated with champagne, mineral water, and bubbly drinks of all variety. They, along with cold green tea sweetened with honey, make great Venus offerings.

Returning to color — clear or white Venus is more allied with Libra than Taurus, by nature of it being an air sign, which tends to prefer a minimalist, straight, and clean aesthetic. You can observe this in the way people with strong Libra style themselves compared to those with strong Taurus.

Libra tends to prefer looks that are are classic, put together, and elegant, but can be stylistically safe and lacking in color or preferring pastel, whereas Taurus gravitates toward accessorizing, is more likely to explore trends, and tends toward a girlier, busier, “cuter” and highly coiffed aesthetic.

Someone recently asked on Instagram why I hadn’t mentioned pink as a color associated with Venus. All pastels are ruled by Venus because they are a byproduct of being mixed with white, which is a primary Venus color.

Pastels signify Venus’ ability to mix compatibly with all things and is an illustration of her moderating and cooling influence. Pink is the byproduct of Venus tempering red, the color of Mars, but she could also brighten up black, essentially remediating Saturn. #magicalcolortheory

Copper is easily one of the most reactive metals to the touch (short of liquid Mercury, which also makes sense). It will almost instantly react to the oils on your skin and begin to change color and even texture, ultimately resulting in a green patina.

It also has a purifying and energizing effect on water it comes into contact with, another element allied with Venus do to her moist and cooling nature.

The metal of Venus, being the planet of love, sex, and connection, should be reactive to the touch and highly conductive, which copper is. That’s why copper is used in wire, and, interestingly enough because it matches so many Venus myths, it’s fitting that people steal and “strip” copper wire to absorb its value for themselves.

Venus figures, in lore and (unfortunately) in life, are the most frequently kidnapped or traded genre, because people desire their beauty and want to selfishly possess their value. This leads us down the rabbit hole of consent, autonomy, and all that very important stuff, but it isn’t the primary topic of this piece, so we’ll bypass that…

The reason I’m detailing all of the logic behind these associations is to show how deeply rational they are.

This dynamic is part of why you can never be too good at the fundamentals, especially in astrology and magic. All else flows from there, and if your basics are broken, not too much good can follow. It’ll deprive you of the ability to draw your own conclusions, and your results will suffer.

If you understand the logic behind associations, you can create your own, and that imbues your own work and your own magic with freshness and originality. It is the layering of association and harmony between elements that creates a delineation or result that is cohesive, accurate, and potent.

Make a practice of auditing the underlying logic in all things. Try to understand the mechanics that make it work, and in the meantime (or if you don’t have the energy, time, or desire to), get your advice and your magic from people who seem like they do.

Sometimes it’s better to hire a specialist than to do something yourself, but discernment and dedication to “doing it right” are key, on behalf of yourself and whoever you use as a consultant or a practitioner.

Bonus point on Venus and her related numbers —

The number 7 is associated with Venus because that’s the amount of time it takes her to go through her full phase of retrogrades through the zodiac, also called her synodic cycle.

Her lesser association is the number 5 because she first traces a pentacle in the zodiac as she performs her retrograde pattern, and is related to the pentagram and the harmony of the five element theory. Five is the primary number of Mars in planetary magic, who is Venus’ archetypal mate, and paired partner as the lesser benefic and malefic respectively.

What do both 7 and 5 have in common? They’re odd numbers.

Sets of things presented in odd numbers makes them visually more attractive, as a fundamental design principle, and odd numbers have a tendency to be related to yin principles. Odd numbers, counterintuitively, create more visual balance than even numbers do — and if Venus knows anything, it’s her angles.

Here is an image of the pattern Venus traces as she makes her 7-year rounds. 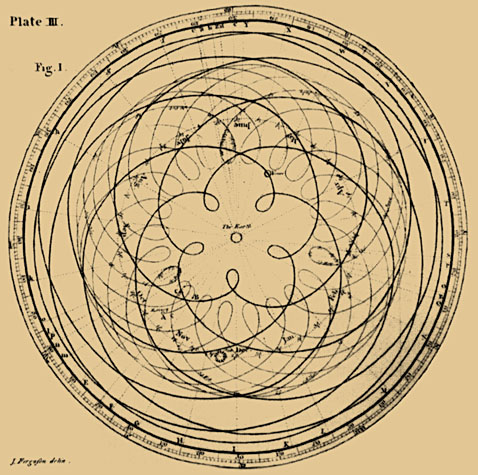 Give the Perfect Gift Using “Real” Astrology + the Natal Chart