In the pre-dawn hour of Mars on New Year’s day 2020, Sphere + Sundry’s first Mars in Scorpio series was ritually labored into being. It was a synchronistic start to the year, as the Mars’ Degree of Exaltation series (sold out) was the genesis working of the enterprise entire, reflecting the zodiac itself, starting on a Martial note. It also happened to be in the dark half of a Tuesday, the day attributed to Mars and considered the night of Saturn, the sign ruler of Capricorn, where Mars exalts. 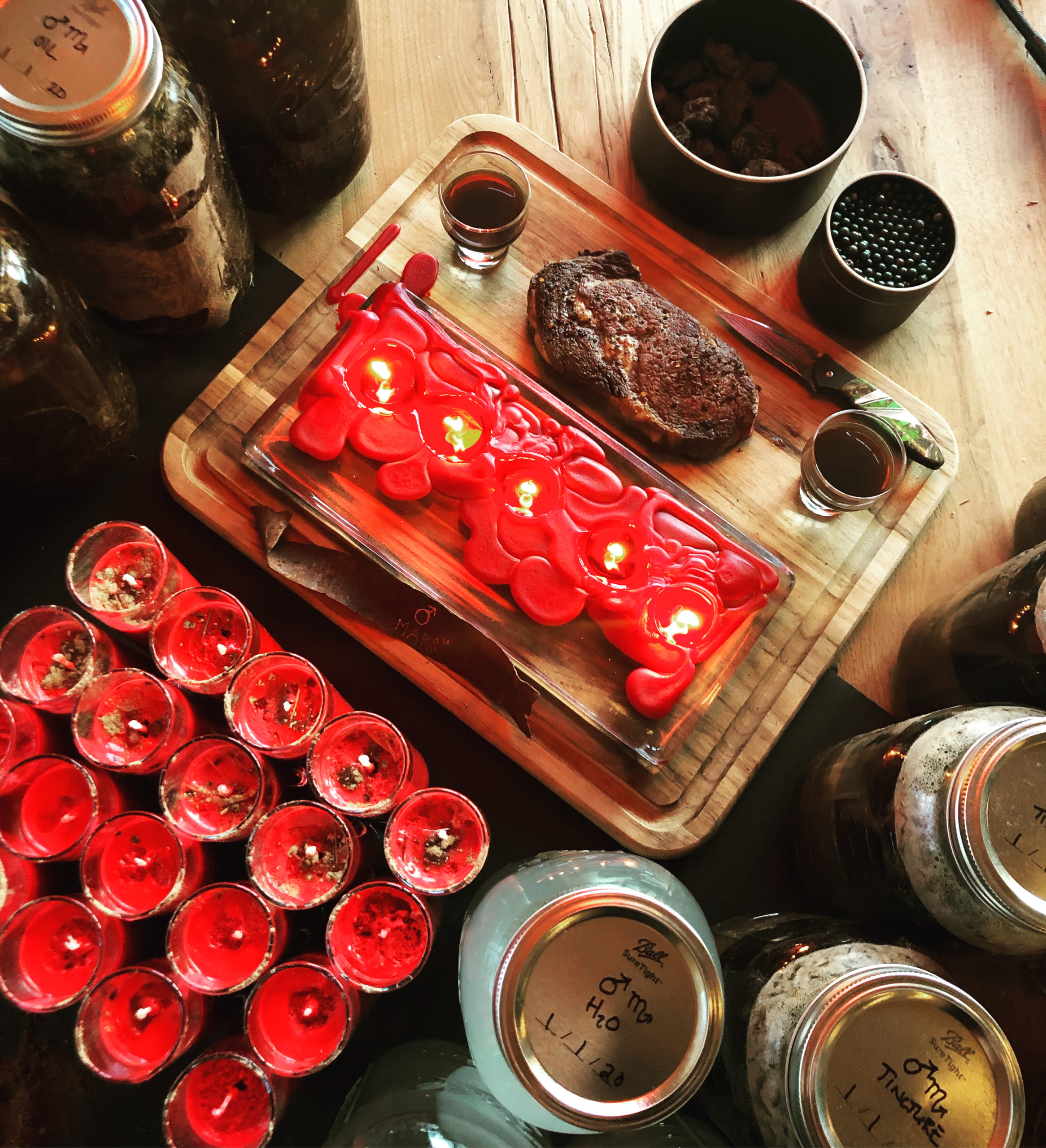 Mars at their archetypal best is the lone soldier, toiling in favor of The Mission without regard for oneself or execution of the necessary. Here in its own rulership, Mars is able to devote their efforts to that which needs doing in an uncomplicated manner, reflecting another synchronicity and return to form in the sense that this election did not work for any of our favored and staple collaborators. Tony was impeded by Saturn’s ray intercepting the Moon’s incoming aspect to Mars captured by the West Coast, and the divination results for Elizabeth’s engagement were ill-omened, so alone at the ass-crack of holiday pre-dawn, I reported to the magical trenches for duty.

Black coffee and cast iron grilled steak were prepared as offerings, in addition to 5 blood red candles, bourbon, and incense from the Degree of Exaltation cones on the main altar. A small piece of the meat was cut and included in the still pot for the hydrosol, in addition to freshly drawn iron rich well water and proprietary additions formulated to achieve specifically desired outcomes.

The angle of approach for this series was simple: create potent talismanic materia of a Martial nature while mitigating malefic fallout. A combination of classical ingredient associations for Mars, such as bloodstone, red jasper, peppercorn, red ginseng, stinging nettle, scorpion pepper, and the like, in addition to other herbs and sundries typically employed in Hoodoo and Conjure for promoting fortitude, strength, potency, and victory, such as High John the Conquerer Root, Devil’s shoestring, and Devil pod. 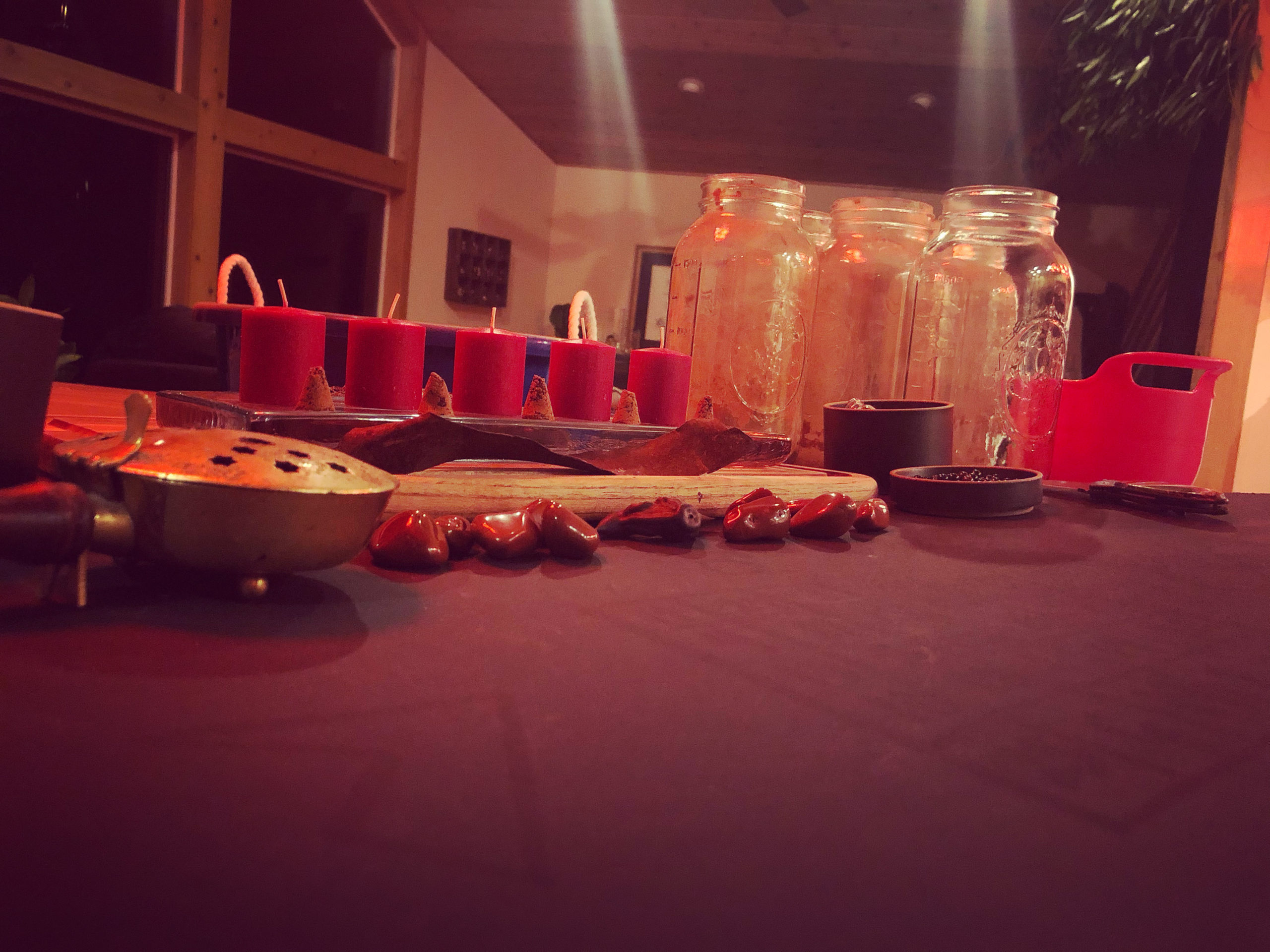 Scorpio is a sign of renowned mystique, over-famed for its sexual nature. The sexuality of Scorpio stems from its emotional depth, intense and singular focus, and desire for intimacy, unlike the unbridled and unashamed sexual expression of Sagittarius. It’s the obsessive, controlling and twisted love of Manpires, along with their characteristic ilk, which enough of us hold a perverse weakness for to fuel billion dollar franchises the world over.

This election gets a lusty boost from its waxing Pisces Moon in the third face of Pisces, a Mars ruled decan in a Jupiter ruled sign. This face was named by Austin Coppock in his seminal work 36 Faces “A Cup of Blood”, and behind closed doors (aka conference lobbies after midnight) as “the Donkey Decan”, for the Picatrix depicts within Pisces III, among other things, a woman in a donkey show. Holding a bird. 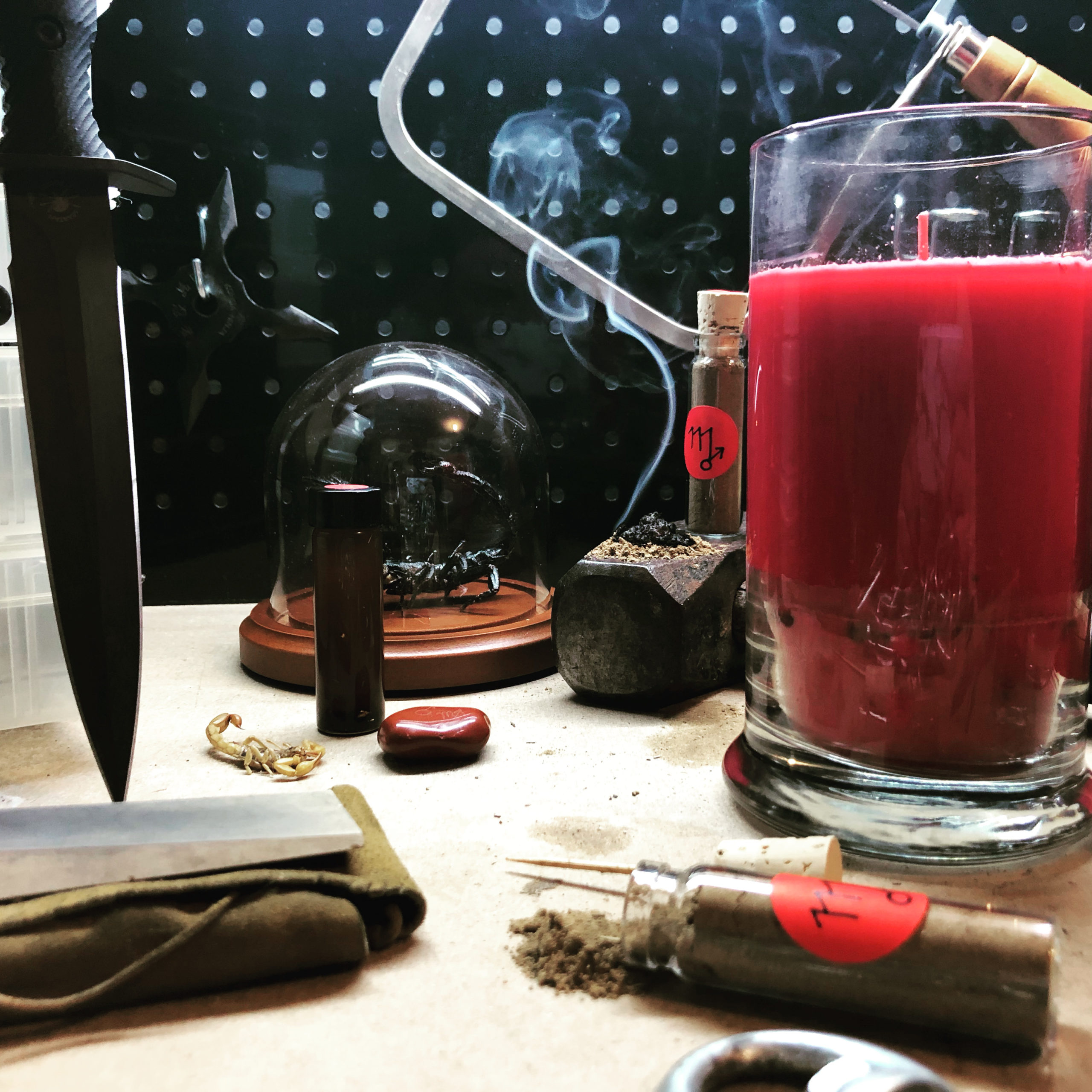 The poles of sexually focused gender dynamics are primarily astrologically depicted by the pairing of inner opposites, Mars and Venus, and every natal chart possesses both planets, just as all people possess varying degrees of male, female, and gender-neutral nature.

If we want to boost our sexual appetites for “giving it”, we amp Mars. If we want to enhance our general desirability and ability to “receive it” with pleasure, we turn to Venus. It is the friction they experience by rubbing against one another that activates their prime sexual manifestations.

Those remain the archetypal dynamics regardless of the individual, for at the end of the day, we all have stuff that can penetrate, and/ or be penetrated. It’s how these energies interact with one another, in addition to the world within and around us that generates the result that matters.

Often one’s relationship to gender, both their own and other people’s, is reflected through the unique conditions of Venus and Mars in the natal chart, which can reinforce or erode at typically gendered expressions, preferences, and identity. Mars and Venus are far from the only factors, but they’re a place to start. Astrology, at its best, and at heart, is supremely queer.

Given their energetic expressions, this planetary pairing love to play off of one another, and I encourage those of all stripes to have fun exploring them, both individually and via their coupling. 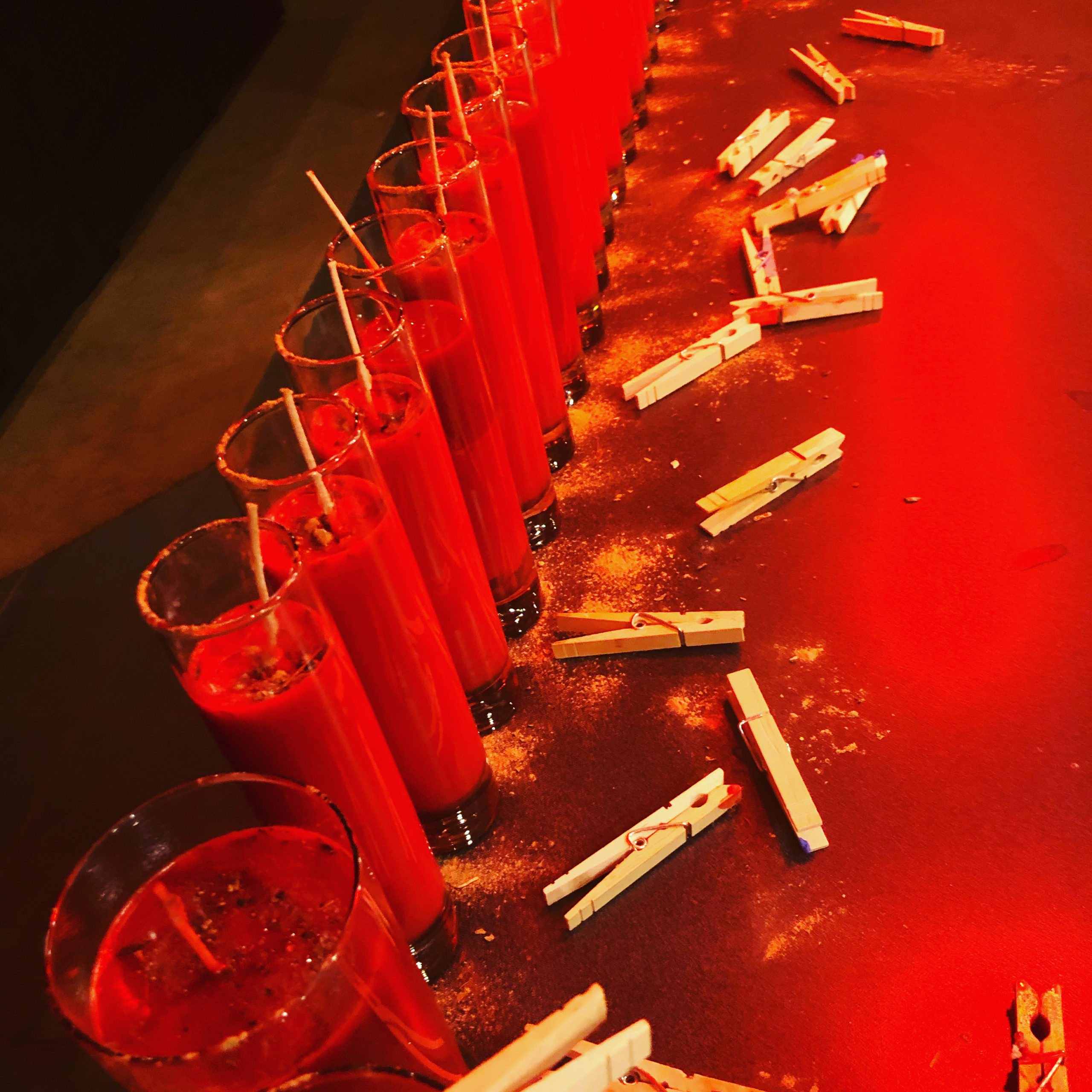 And given all of this talk of the sexual, it’s important to note that the charge of this series is remarkably easy (and important) to steer, either through dedicated activity or by layering with other series. Mature and dignified Mars is not a sex crazed maniac, contrary to some outmoded Cosmo-esque pop-cultural falsehood. Scorpio can engage deeply with whatever it wants/ desires, and there is much else it can accomplish.

Mars can be used to enhance productivity, promote focus, get work done, slap down bitch-assness, “man up”, engage The Mission, and Answer the Call.

Mars in Scorpio increases tactical and logistical intelligence. It is so grounded, it might be better to call it undergrounded, coursing through tight inner channels rather than prone to explosive external expression. It is both hot and cold, motivating and calming, for the best mindset and emotional state coming into any battle is a terrifyingly dangerous calm.

Mars in Scorpio brings about satisfaction in solitude, and the result of its use alone can be anti-social. Other side effects include a tendency to get mired down and obsessed, so focused on what one is engaging so as to become slow, failing to move on to the next thing as quickly as perhaps one should. Scorpio is a fixed water sign, so it can intensify thoughts that drift to overcoming perceived external threats and problem solving. Promotes sweating and the smell of body odor, but increases pain tolerance, as well as the ability to operate under stressful circumstances. 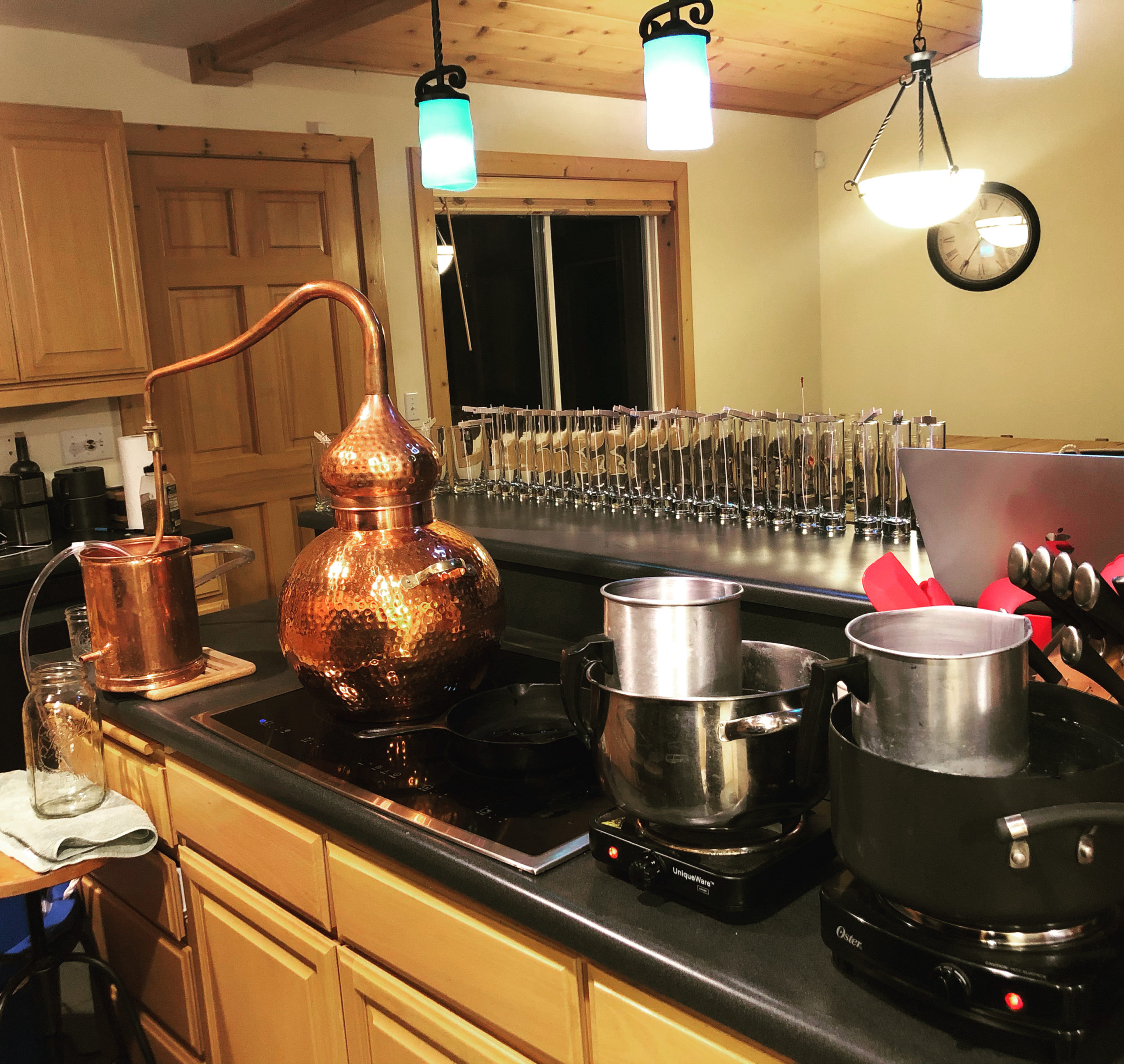 It can be useful as a weight loss aid and to promote discipline, grit, inner steel, and resolve.

This is best to apply before engaging with work, physical exercise, or in the day and hour of Mars for remedial and exploratory purposes. It is useful for shutting down inner complaints and overcoming laziness and whiny impulses. “Get over it and get back to work,” the deep timbre of Mars in Scorpio snarls. Prepare to call yourself out for such indulgences and soldier on under this influence, even if it’s not very enjoyable. You’ll care less that it isn’t.

Creating a series for a malefic while reducing malefic manifestations is no easy feat, and for that reason, only one item features actual scorpion, supplied by the wonderful Richard Spelker. Two oils were created for this series, the default Temperance Edition, which is a lower, safer, and more productive key of the charge intended for regular application, and the Emperor Edition, containing the dust of 10 venomous scorpions powdered in the hour of Mars and day of Saturn. A talismanic vessel for Scorpionic intelligence, this much more intense oil is for works of magical maleficia and use under the most dire of circumstances, where the mind of a cold and lethal predator needs be employed as your champion. Please use responsibly, and hopefully infrequently. Obviously do not consume it, or apply to open wounds. 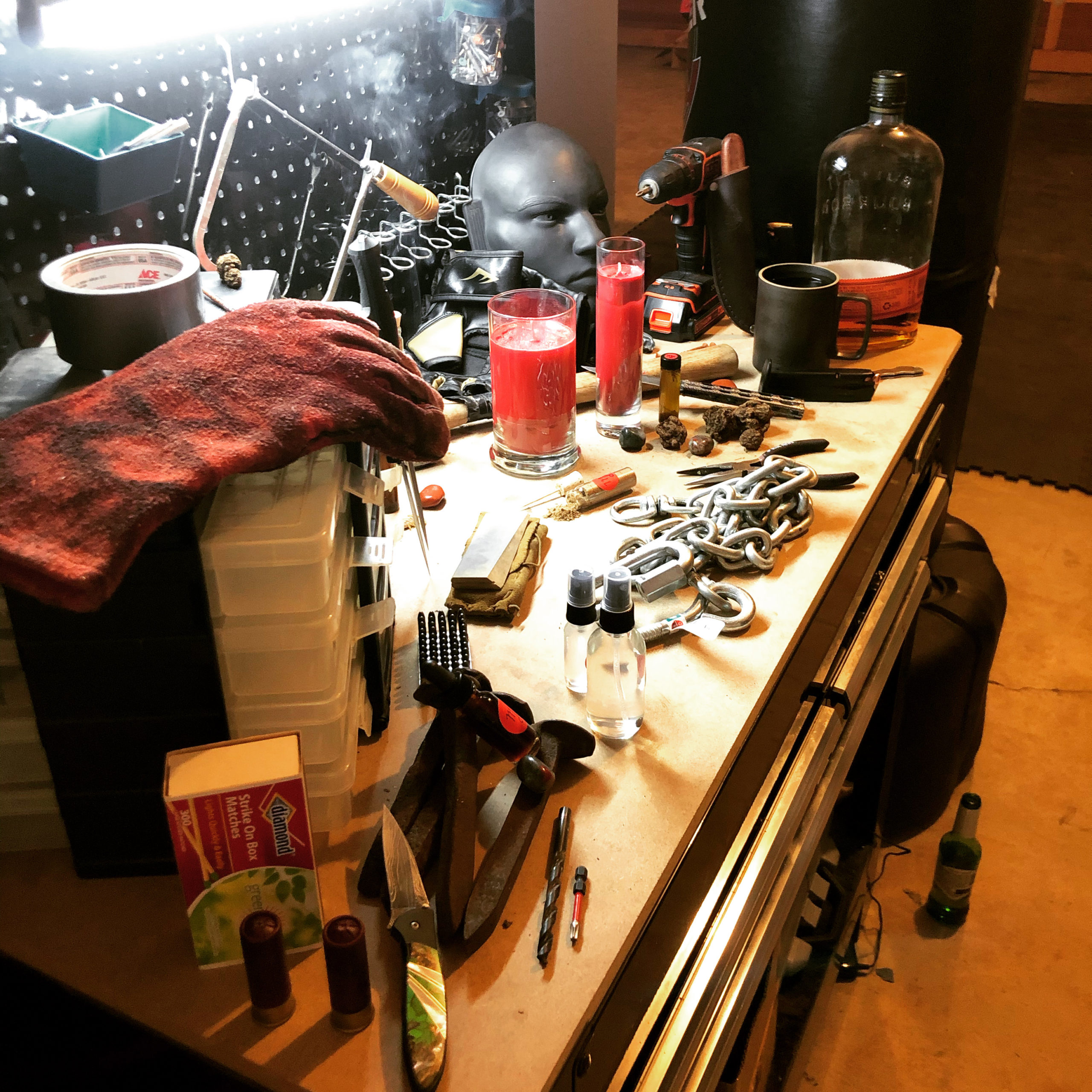 Other shadow collaborators for this series include resident Sphere + Sundry astrologer Austin Coppock, who chose our election, and Jeremy Bechelli of Phytognosis who supplied the ammoniacum gum used in the incense and powder. Thanks also to Jason and Ashley, my ever-reliable soldiers. This wouldn’t be possible without you.

As usual, every package arrives with instructions for basic use and an invitation to the private Sphere + Sundry forum (now off of social media) for ongoing support from both creator and community.