As the Sun set and the hour of Saturn began on Tuesday November 12th 2019, the Mother Algol series was ritually created to talismanic standard during the Full Moon conjunct the fixed star Algol around 26° Taurus. This is Sphere + Sundry’s second Algol series, but differs from the first (sold out) in that it features the Full Moon instead of the New, which lends a more protective, insulating quality, not just by nature of brimming with light, but also because of the Moon’s exaltation, increasing the stability, predictability, and steadfast power of the charge. 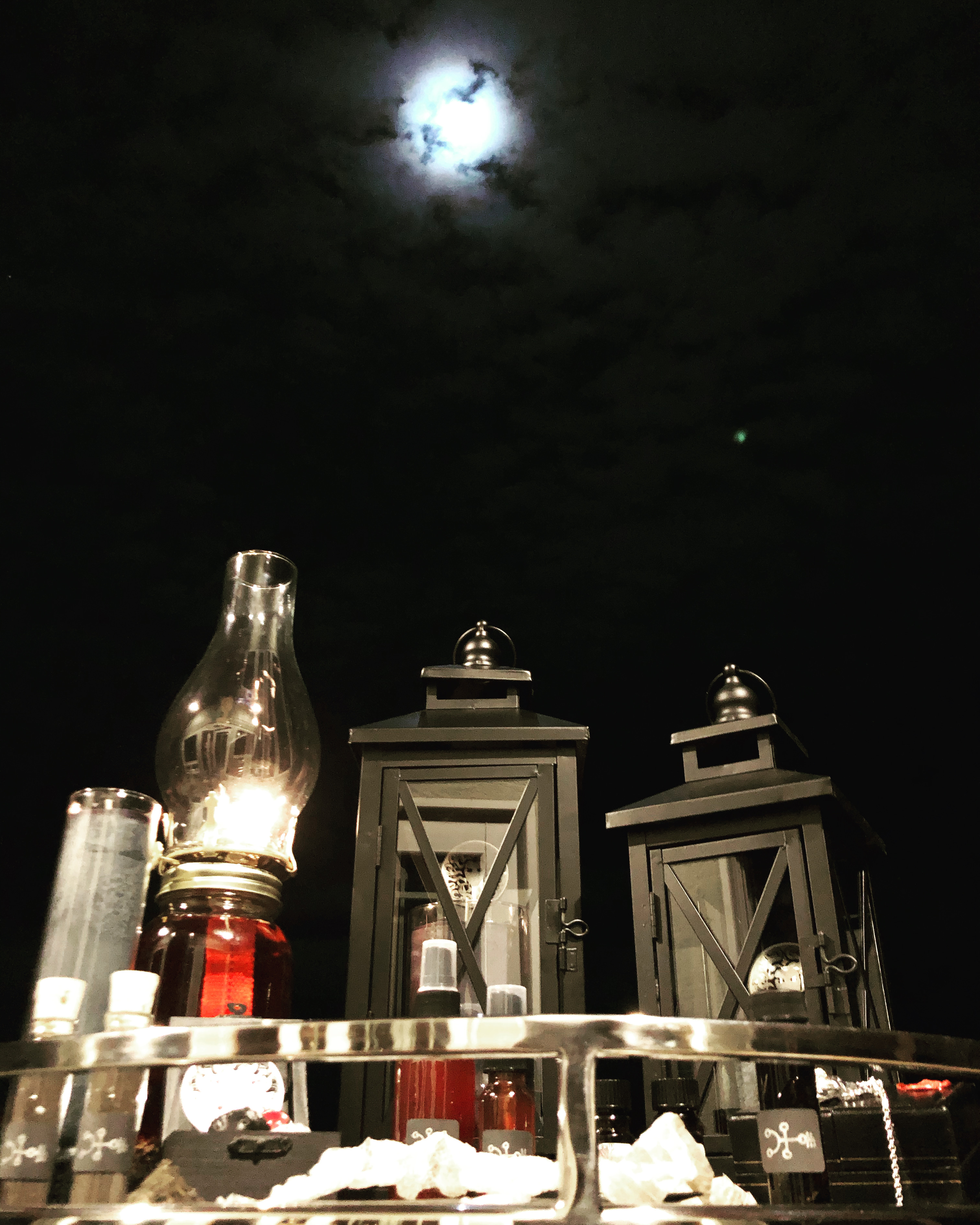 Algol is the most notorious fixed star our sky has to offer, yet it can also bestow unparalleled protection and avenge those who have been victimized by unjust deeds or malicious magic. It was known as the “blinking eye” of the demon due to being a binary star that eclipsed itself every three days, vanishing for what seemed like no reason.

The ancients, deeply suspicious of this behavior, took to calling the star “Lilith”, after the Garden’s original She-Demon. Algol’s full/ waxing/ visible vs. dark/ waning/ invisible cycle, in addition to its natural pattern of triplicity, are further manifestations of the star’s allegiance to the mysteries of primordial womanhood, likely providing the basis for the Lilith association as the first woman history negated, pre-Eve.

Situated in the constellation of Perseus, Algol is also associated with the Gorgon Medusa, and is seen as the head or gaze that curses and turns to stone. There is much to be said about this mythos and Algol’s relationship to Perseus and Athena, but the first time I attempted to posit at greater length Algol disappeared it. Such is a prime lived example of how Algol functions, and its eclipse-like nature and impact. As is this. And this, from the first time around.

The Algol materia, of anything Sphere + Sundry is ever likely to produce, has by far the most malefic potential, and provides the most extreme protection, even to the point of bringing severe harm to one’s attacker in order to make them stop. The utmost care and respect should be shown for these creations, which pack an incredibly powerful charge that will draw the direct gaze of the primordial dark feminine, in all her potentially destructive glory, upon whoever she comes into contact.

Exposure to Algol often triggers headaches, nausea, hot flashes, and feelings of dread. Gagging or even dry heaving are also common side effects, the sound coming out of the reflexively open mouth even sounding like the star’s name, “al-ghouahh”, chest clutched. Electrical disturbances are another common manifestation, and the star is famous for its association with beheadings.

This force, however, can also be channeled for personal good, providing protection for the self, loved ones, and possessions from malcontents and evil doers, or as an agent of justice to avenge wrongdoing. There is often a period of “settling in” with Algol, and making peace with such an incredibly potent, weaponized force. Algol’s gaze is activated around new people and new circumstances, as She surveys Her surroundings, dutifully performing threat assessments. Side effects are likely to express themselves in the beginning of the relationship and diminish over time as rapport is built or the materia is stowed and forgotten, turned to in the case of need. Symptoms may kick up again upon re-engagement or when placed wards start sounding. 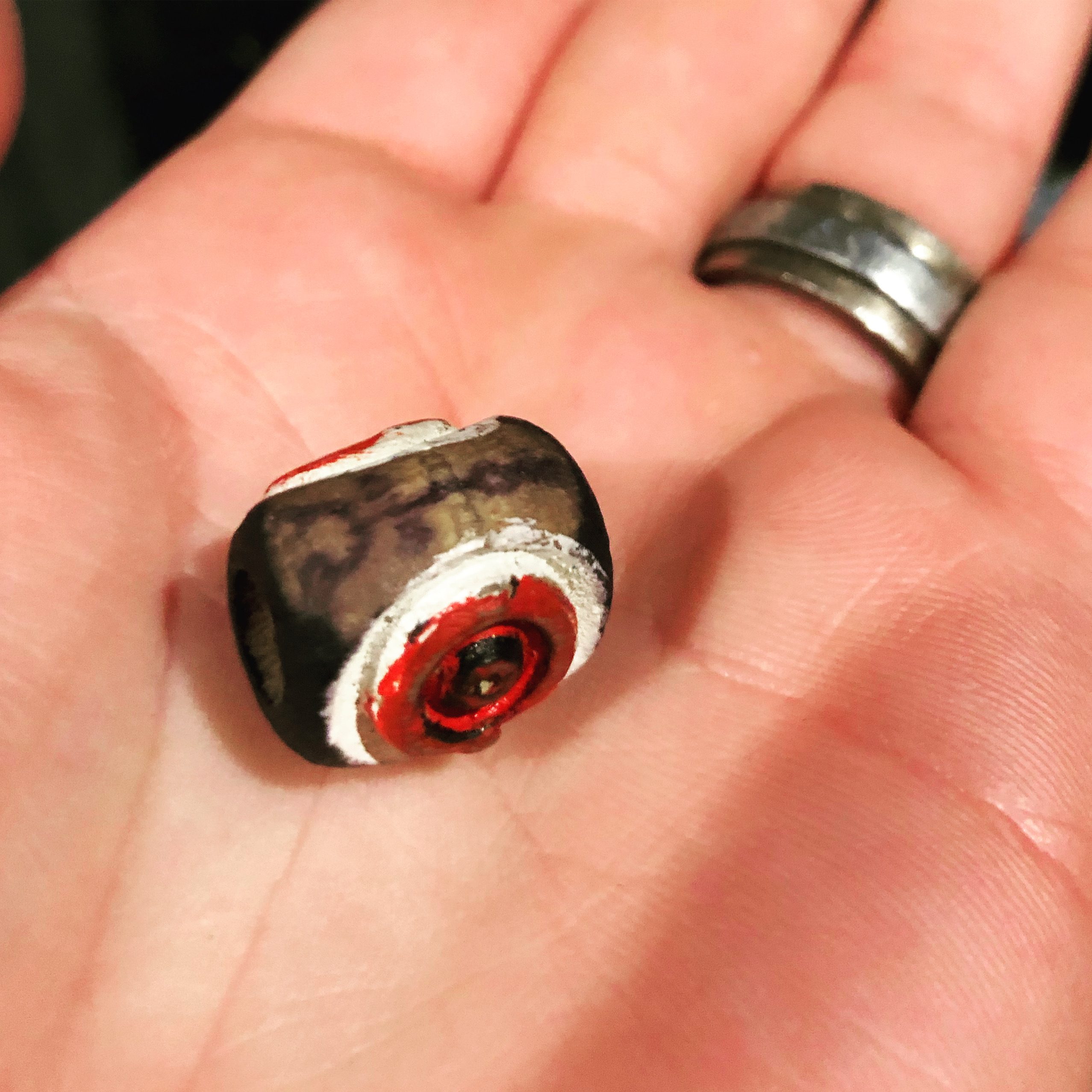 My decade of experience working directly with Algol in a talismanic capacity have taught much, and one of them is how to position oneself in a way that mitigates Algol fallout while partaking of the benefits. Some of that is formulaic, some of it is electional, some of it is characteristic, and some of it is relational/ devotional. All of that expertise has been brought to bear for the client who orders from this series, available in this writeup, and the additional directions that arrive with your materia or talisman, and finally, in an ongoing basis via the Client Community. Note that the listed side-effects still stand, as there is no application of strong malefic energy that doesn’t exact some form of toll.

It is highly recommended that if you are to work with Algol, you also have some form of Dark Goddess practice or relationship, preferably in place before you begin engagement with these (or your own) creations.

This fixed star is in Taurus, a Venus ruled sign, and has long been associated with loss and destructive wrath. For one to successfully process Algol without ill effect, one must meet Her gaze with deep humility, heart in hand, and genuine respect for the destructive power inherent to Her nature. There is nothing a nigredo based life-form hates more than bloviating ego and hubris, and Algol will begin dismantling and demolishing those traits utterly and completely should they happen to catch her Eye without proper mitigation. These can involve extremely negative manifestations in the life and in the body. Males especially should take care in how they approach Algol, and misogynists would be better off avoiding it entirely (or not *wink*). 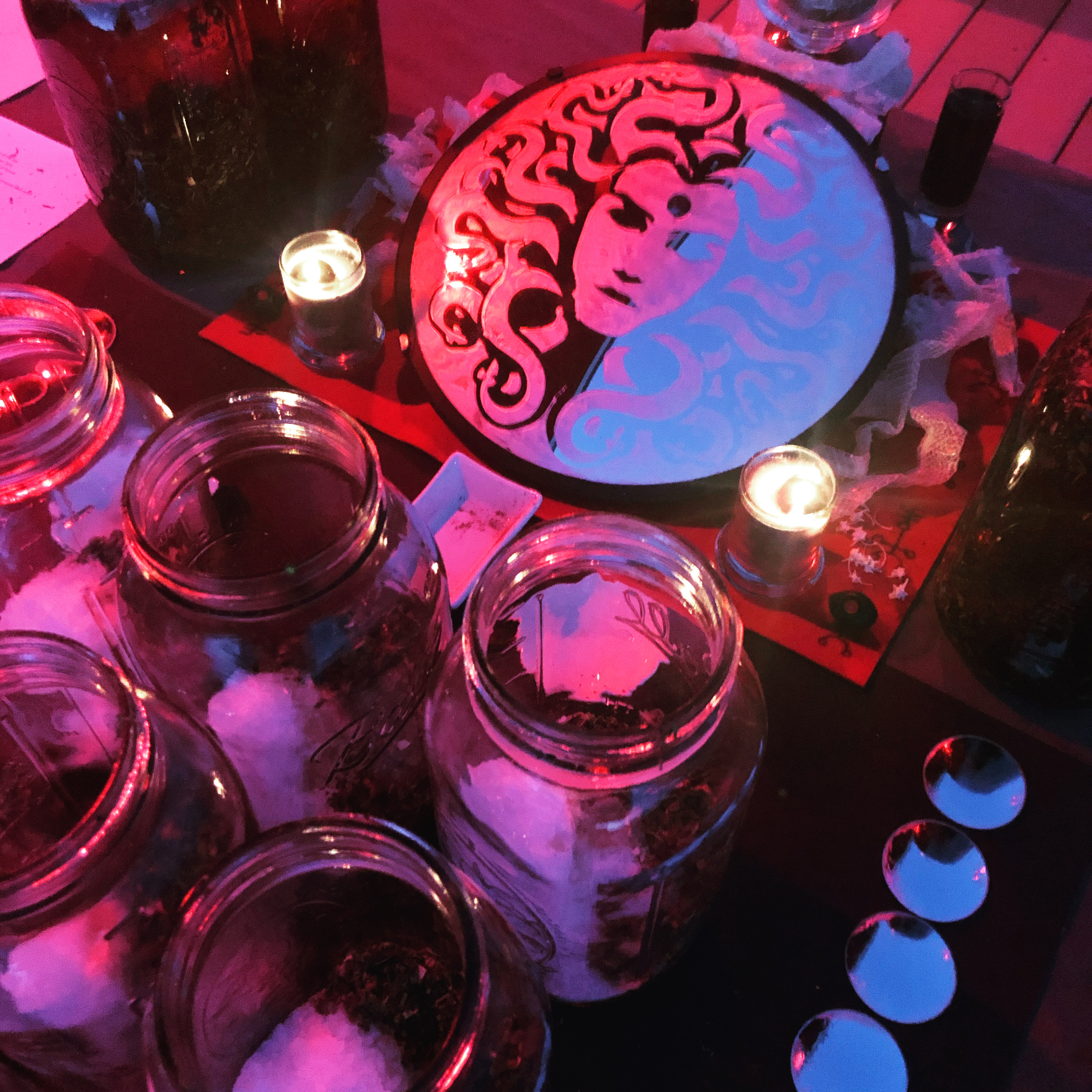 Appropriate beings to work with include Lilith herself, Hekate, Black Tara, Chinnamasta, and Kali, among many others. Making offerings or saying mantras to these beings and praying to them as an adjunct to Algol workings is always a good idea. Goddesses of this class can help channel Algol’s power and provide a guiding, even protective lens through which to filter its influence. The concept of Algol as Dark Mother, us as her children begging for, appreciative of, and in need of Her protection, can also be addressed for such purpose. Make sure the charge is directed to the outside, physically and energetically, rather than in. Try to work out of doors.

This series uses classical Agrippan associations for Algol, including homegrown black hellebore leaf and root harvested during the hour of Saturn and dried, and diamond. The formulation includes many other herbs and ingredients to boost its protective, insulating, and counter-magical, hex-breaking qualities, in addition to belladonna flower, whole mummified rattle snake, snake’s skin, and rattlers (all ethically, legally begotten).

Now that we’ve gotten the warnings regarding potency and side effects out of the way, how can Algol help?

She provides protection, dutifully wards the self or space in which she is installed, counters the magic of others trying to harm or influence us, curse-breaking and hex reversal, sending it back to its source, extreme defense against people trying to harm us, our loved ones, and interests, disappearing, scaring the shit out of people, becoming stronger and more self-possessed in the form of the Dark Mother, standing in the power of the primordial feminine, doing what needs done, promoting honesty and brutal clarity, provoking wrath, energetically poisoning, and the like. You know, all the light, fluffy stuff 😉

For the first time, we welcome renowned occult author Robert Fitzgerald, possessing decades of experience at the crossroads where witchcraft and stellar magic intersect, who received the transmission “Opening the Eye of Al-Ghoul” along with two original sigils during the night of the election. Thirteen sets were drawn by his own hand the following conjunction between Luna and Algol, and are offered as ritual sets along with the candle and incense necessary to execute the Rite. Nine of these are being offered to the public, individually numbered, allocated as fate would have it.

Thanks and praise to my fellow operators for contributing their fine works to Mother Algol.

Each order includes instructions for application, a prayer to Mother Algol, and suggested times of working. It also includes an invitation to the private Sphere + Sundry client forum (now off social media) for ongoing support from both creator and community.

Note: Due to Algol’s malefic potential and sheer power, a divination will take place for every order placed in this series. If the results are ill-omened, we cannot ethically ship, and any Algol items in your purchase will instead be refunded. If the results are neutral or positive, they’ll fly as usual. Initial fulfillment will take longer for this launch due to the extra time this requires. Please use Algol responsibly.