MONS(W)OON SEASON surges on at Sphere + Sundry with the debut of Exalted Venus II ~ a series so approachable and beneficly benign, it may well be considered one of the few universally applicable.

A palate cleanser of sweet simplicity…

Created the morning of Luna in Cancer, and funnily (fractally…) enough, on April 7th: the day which hosted the creation of our maiden Exalted Venus series just 3-long/short-years ago on the same date, 2019. 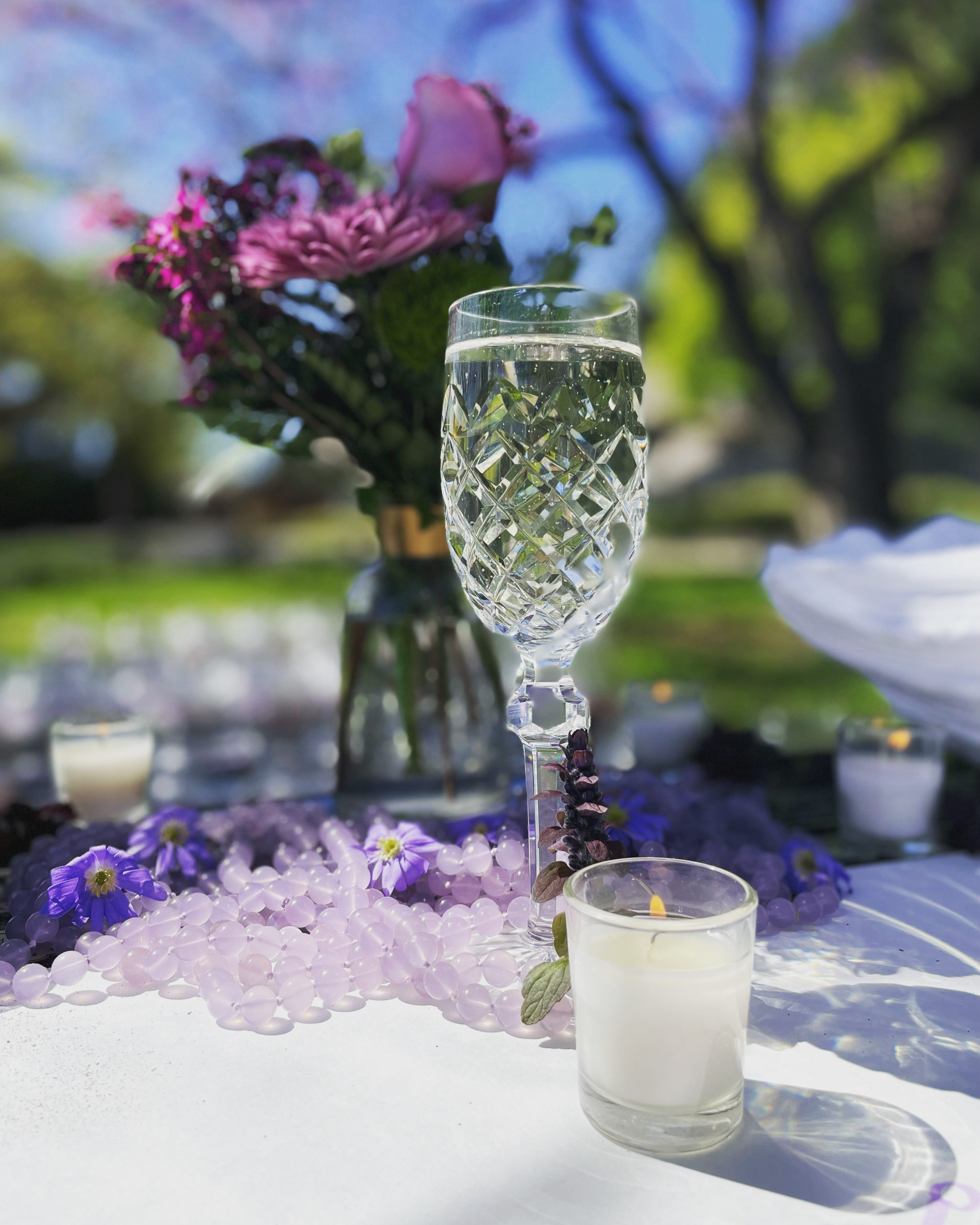 After recent deep dives into technically loaded, complicated descriptions, this *already* feels as nice to write and to release as I hope it will be for you, Dearest Reader, to take in, and moreover… to enjoy.

Venus here is lovely and flow-y and amenable, and ultra wearable ~ a Vacation in a Vial, and you should probably get some. The end ; )

It should be noted that the biggest difference between the 1st and 2nd series ~ for those already familiar, or in terms of reading and contextualizing reviews/ managing expectations ~ has many of the same notes and features, but is significantly less Neptune-y. Which is code for boundary-eroding, psychedelic, and excessively mind-altering.

I’ve mentioned in the Client Community before that in a world with time machines, that series would be renamed Venus-Neptune in a heartbeat, because the conjunction between the two was SO close, and the impacts SO palpable (despite no formal entreaty to the nebulous outer-one).

Some Clients reported the level of intoxication resulting from application rendered it almost unwearable, or wearable only under very specific, tightly controlled, and close-knit circumstances.

That is far less the case in this electional iteration (for the vast majority of offerings!), though Venus in Pisces does tend to prefer Herself intimacy and genuine connection over less personal alternatives. 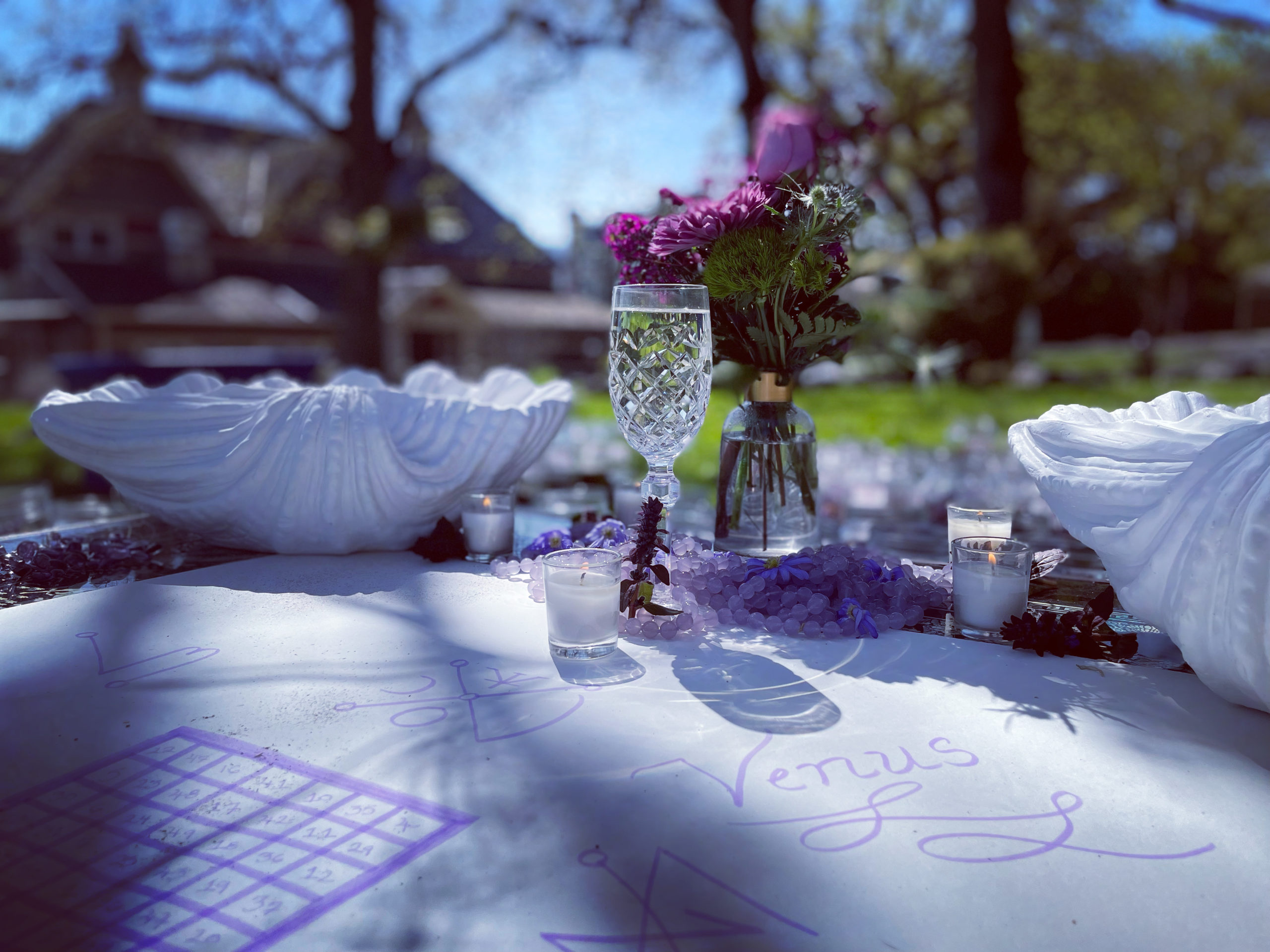 Venus here is the Morning Star on our Midheaven co-present with Her fellow benefic + sign ruler, Jupiter. Luna is vigorously waxing from Her place of Rulership, in close contact to Venus by trine, throughout the hour of Venus.

Jupiter being at the ready makes this slightly less flowery/ hyper-femme feeling than previous Venus series… still soft and seeking connection, but also more active, exacerbated by that amped, waxy Luna in Cancer. Something most people can likely wear throughout the day for stress relief and enjoyability without feeling too indulgent or lazy to function.

[For heavier, more profound state alteration of body or mind, apply multiple Forms, add Luna, or simply apply to multiple and larger areas. Such is a feature, not a bug, since it adds lots of flexibility to application. A testimony to Her mutable and amenable nature, akin to wearing layers of clothing in changeable weather…] 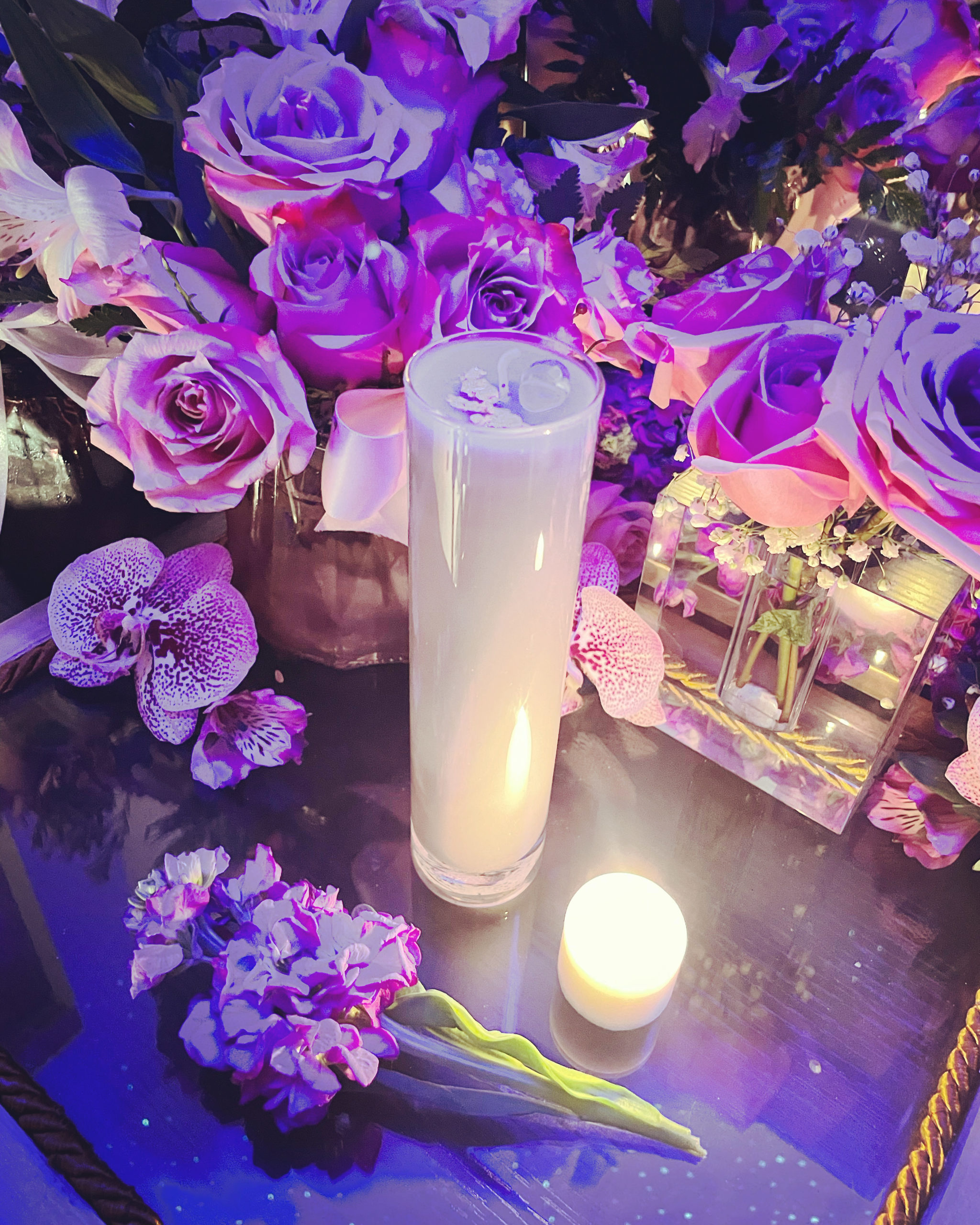 Venus doesn’t mind putting in a reasonable amount of work here, so long as it’s at Her own comfortable pace ~ though application is best suited to add depth and flourish to personal and social time, such as when off the clock, enjoying your spouse, fur babies, and family, creating/ crafting, or doing that which brings you pleasure.

Most are already familiar with what the Fairer Benefic is good at and for, and in Her Exaltation (backed by Jup-Jup!), She’s simply better equipped to make good on those promises than in any other sign, and with less… specialization, than Rulerships.

She brings beauty, charm, charisma, enjoyment, sociability, an easy going nature, skill and interest in the Arts, glamour, connection, me-time, us-time, and siren-calls toward desires of the heart.

More than anything in particular, offerings from Exalted Venus II offer relief, respite, and renewal from everyday stressors. Hers are the sweetest, freshest of waters… morning dew upon tender leaves… gently flowing streams… the juice of a perfectly ripe fruit ~ perhaps your favorite fruit ~ releasing itself for the sake of your nourishment, enjoyment, and yes… pleasure.

Venus is conjunct the Royal Star Fomalhaut here ~ which existing Clients will be familiar with, and others can learn about in its dedicated write-up if they wish. The Venus-Fomalhaut Oil included in this release combines and unifies materia from the two respective rituals; though the rest of the items were formally consecrated to Venus and Venus alone. Many are vegan, some contain organic honey. Check individual offering data to confirm. 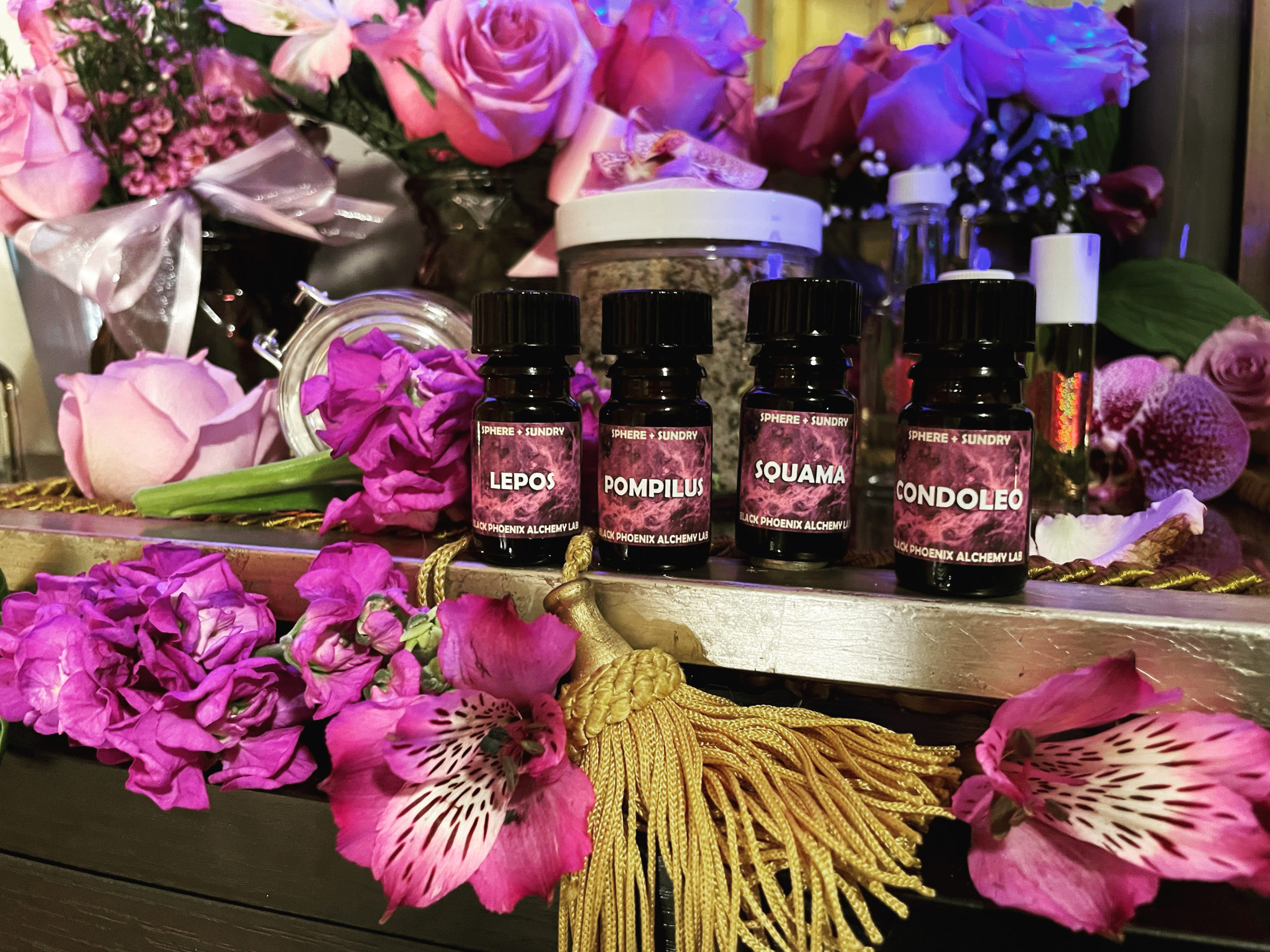 I know these essays are typically rife with disclaimers, but this really doesn’t need many — it’s safe and uncomplicated, *perfect* for those new to Talismanic Materia and/ or, the world of Sphere + Sundry. Wonderful for gifting or recommending.

Venus energies can sometimes attract unwanted attention, so watch that depending on where you’re wearing it and with whom. Deneb Algedi makes a great spiritual body guard if need be, and since Venus is the great moderating force, She’ll pair nicely with just about anything. Jupiter in Pisces, Luna in Cancer, and Fomalhaut will have an especially *chef’s kiss* symbiosis. 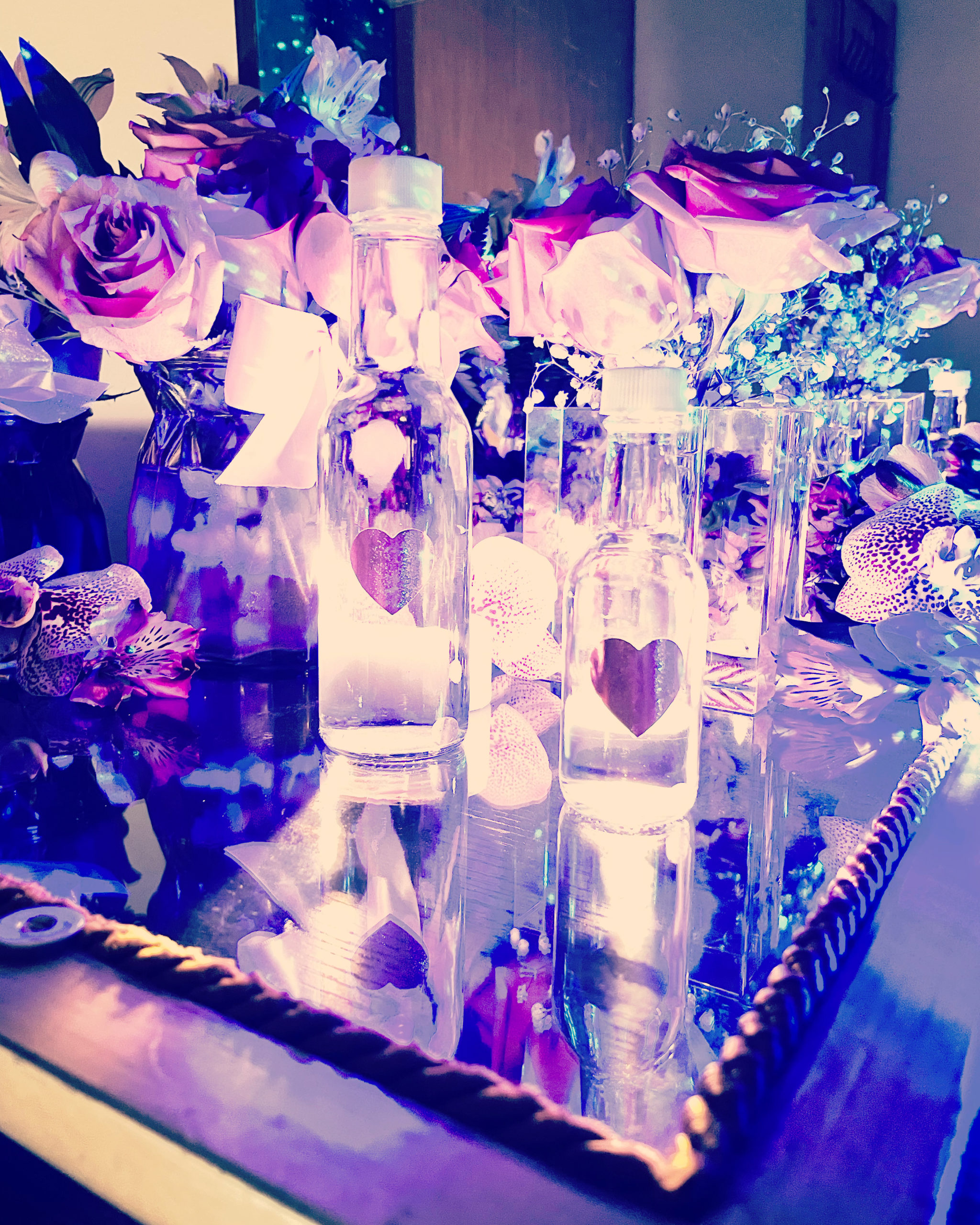 EVII is also a wonderful ally for those who work in socially demanding, tipped professions, and for anyone who wishes to soften and sweeten the way they’re treated as they move through the world. Venus tends to draw gifts, upgrades, compliments, and favors.

Application begets relaxation, release, and cozy-fication of any atmosphere. It’s easy to take in an ~amorous~ direction, solo or partied, but only if you so wish. It’s light and lovely, and I think you’ll <3 it a lot.

Great thanks to Austin for the election, Tony for the bling, and Elizabeth for the bouquet.

Gratitude and appreciation to the Sphere + Sundry Team, who works their cute little everythings off to make this magic a reality for so many!

Each order arrives with a sweet treat, basic instructions for use, timing suggestions, and a prayer, alongside an invitation to join our warm + welcoming Client Community.

BOOK is getting closer to fruition! If you would like a copy, please take a moment to fill in the form below, to help determine how many to produce + in which formats. This will add you to the mailing list for book-based notifications only. Thank you so much!

In order to make the “product”-end of Sphere + Sundry more accessible and less intimidating/ overwhelming for the vast majority of folks, I’ll be striving to streamline write-ups going forward, and channel teaching commentary into BOOKS, COURSES, and appropriate avenues for those pursuing the Talismanic Arts for themselves and their own clients.

I would like to thank everyone who has been acknowledging my role in pioneering the field of Talismanic Materia as it’s currently emanating — tremendously heartening — and also reiterate my intent to support you + the field in more formal capacities over time, should you so wish <3

Last but not least, keep an eye on Foolish Fish as a great free resource for learning about the goings on and practice of esotericism and occultism. We’ll be debuting an interview at some point ^_^